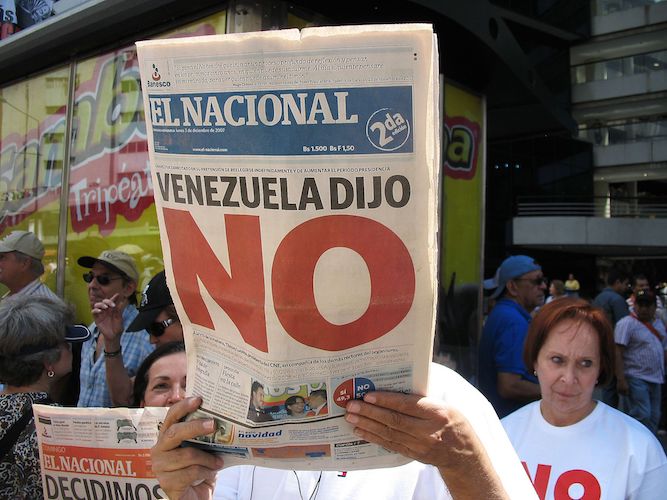 The “Bolivarian Revolution” declared by the late Hugo Chávez a process to bring about “participatory protagonistic democracy” completed itself and came to an end yesterday, October 20, 2016 as it moved definitively into a dictatorship. As Frank Muci put it over at Caracas Chronicles, “the charade is over.” Now the only democratic process to bring Maduro’s disastrous reign to an end has itself come to an end. The referendum on Maduro’s presidency, which some 90% of Venezuelans support, had been delayed, blocked, impeded and sabotaged at every turn by the Bolivarian government, and now it has been indefinitely “suspended” by the National Electoral Council (CNE).

The referendum was the only way Venezuelans had of removing unpopular or corrupt politicians from office since Chávez had eliminated the possibility of impeachment from the Bolivarian Constitution in 1999. In this case the process has been complicated as, first Chávez and then Maduro, took control of every branch of the Venezuelan government to preserve the power and rule of the Bolivarian elite. The most dramatic recent instance of this occurred in December 2015 when Maduro illegally removed justices of the TSJ then repacked the body with his supporters after the opposition won the National Assembly elections by a landslide and gained a 2/3 majority. Since then Maduro has used “his” supreme court to strike down every piece of legislation the National Assembly has passed. He has also used the court, as well as “his” Chavista-packed National Electoral Council, to give a legal appearance to illegal and unconstitutional rulings as dramatic actions it took over the week before the suspension will demonstrate. The TSJ and the CNE have been the two fists of the “Bolivarian Revolution” the government of Nicolas Maduro has used as it attempts to beat to death democracy in Venezuela.

First, on Friday, October 14 Maduro passed the 2017 budget by executive decree—and with the approval of the TSJ—unconstitutionally bypassing the National Assembly. “Unconstitutionally,” as in violating 7 articles of the Bolivarian Constitution. The following Monday, October 17, the TSJ threw out another unconstitutional roadblock. It decreed that the opposition would have to gather signatures of 20% of the voters per state, as opposed to 20% of voters nationwide, otherwise the referendum would be “nullified.” But this ruling contradicts previous TSJ rulings and, as Constitutional lawyer José Ignacio Hernández points out, violates Article 72 of the Bolivarian Constitution which says that the 20% of the electorate that voted for the candidate in question, in this case, Maduro, in national elections, is all that that is needed to trigger the referendum.

Before the opposition could recover from this shock, another blow came from the National Electoral Council (CNE) on October 18: the elections for State governors which they are obliged to carry out before the end of this year (obliged, again, by the Bolivarian Constitution), they have decided to postpone. Their terms will be illegally extended until the first half of 2017.

Finally, one week after Maduro did an end run around the National Assembly to pass his budget, state courts declared the one percent of signatures gathered in an earlier stage of the referendum process “null,” despite the fact that they had been validated by the CNE. As José Ignacio Hernández points out, it’s not credible that such a ruling by four state courts could occur simultaneously without some back room coordination at the national level. As he put it, “what occurred was, simply, a crudely coordinated plan: various Tribunals executed a plan conceived for the suspension of the referendum.” And sure enough, later that same day (October 20th) the Bolivarian-dominated CNE announced that the next step of the referendum, gathering signatures of 20% of voters due to be completed the following week, was officially suspended.

So much for the charade. The Bolivarians have proven, like good Leninists, that they only want democracy when it goes their way. They also have made clear, they only will obey the constitution, which they themselves passed, when they feel like it. The rules of the game have now been thrown away—by the rulers themselves. They have decided no longer even to play the game of democracy since, it appears, it was simply a game to them all along.

The Bolivarian Revolution has now become the very definition of a dictatorship.

The Simplisms of the International Left

What they aren’t saying about Bolivarian Venezuela