Winner of the 2010 PEN Oakland poetry book award.
with an introduction by Jack Hirschman

“Clif Ross is among the most highly respected activists of the Left Coast… His own poetry, a generation of works, is here warmly presented in the context of a maturation of tone and voice that is quietly remarkable–and very much like himself. Ross is a fusion of a lyric realism and the power of metaphor. His voice isn’t of the plosive kind. He writes an organic lyric, resisting any attempt on the part of the ‘Poet’ in himself to overcome himself by a kind of verbal oblivion. His poems are expressions of his determination that friendship triumphs through beautiful communications that make one feel solidarity without feeling one’s being indoctrinated or recruited.” – Jack Hirschman, Poet Laureate of San Francisco (from the introduction to the English edition)

“Translations from Silence is a powerful and evocative journey through the belly of the Beast and beyond, led by a wise and love-scarred traveler whose eyes and heart have been burned open, as were this reader’s through the course of her journey.” – Elizabeth Claman

“Between the plastic instant of William Carlos Williams and the sumptuous melancholy of Eliot, in an experiential flow or in epigrammatic instants, sometimes a voyage, sometimes a chronicle of observation, and sometimes brief, ironic fiction: fluid and insistent, or concise and self-contained like snapshots or cartoons, from the embraced idea to the material, all this is taken up in the language of Clifton Ross’s poetry.” – Juan Antonio Calzadilla Arreaza (from the introduction to the Spanish translation published in Venezuela).

This is a review of the book, written by Jannie Dresser, editor of the Bay Area Poets Seasonal Review:

Richmond poet Clifton Ross, who teaches creative writing at Berkeley City College, placed the poems in his new book, Translations from Silence, in reverse chronology, the better to present what he considers his stronger and more recently written pieces first, and earlier poems in the latter half where they can be contextualized as the work of a younger man. The wisdom of this choice shines in the first poem, “The Proud Sinner’s Prayer” :

O God forgive me for having loved you more

than life itself and correct me in my ways;

so I might delight in the curves of the road.

Give me more tasks and less success

that I may always be occupied with work

but never with fame.

These are words gained through the experience of recognizing that self-righteousness and ambition– whether bent on religious ideology or ideological materialism–are just as much a false path as any of the traditional Seven Deadly Sins. But the arrangement of the poems also lowers one’s expectations toward the latter pieces; instead of encountering weaker poems, I was pleasantly surprised and deeply moved by many of these ‘younger man’s poems.

In so many words, Ross tells us he is one who has struggled with his faith. . . a revelation that infuses his work with greater complexity. In the background of many of Ross’s poems that are otherwise characterized by a lyric and reportorial tone, there is a spiritual sensibility–an existential agon–wrangling intently away.

Ross has spent much of his adulthood observing the cultures of North and South American, traveling extensively in the Spanish-speaking south and involving himself in political struggles. There is a stark, unblinking, and unsentimental tone in poems that are refreshingly non-polemical and non-proselytizing; instead, we witness the clamor and waste alongside poverty and pain:

I muse on the dying light as I walk

the sidewalks of Caracas, crowded with vendors

and throngs of threadbare shoppers,

voyeurs ogling over the plastic glitter

and imported fantasies destined to be tomorrow’s trash.

The light turns golden as it dies

and night opens over the mountains.

or a fool dancing over the abyss

and make my way through a frenzied chaos

of hope in motion and chants to old gods,

Death is a character in this book, unnecessary Death as in the hundreds of thousands of “disappeared” lost in post- colonial battles for power won mostly by generals and commandantes:

in the back seats or trunks of green Ford Falcons

barrelling down the dark streets of Buenos Aires,

They continue to free fall out of helicopters

into the glimmering ocean below;

they continue to scream in the torture cells

of the factories of death and the Military mechanic’s School;

they continue to dig their own graves in secret locations;

they continue to refuse to confess or, again,

they break down and turn their mothers in;

they continue to feel their bones rattle and teeth

they continue to be followed into blind alleys or

up the doors of homes they’ll never reenter.

(from “The Disappeared of Argentina”)

As Jack Hirschman writes in the forward to Ross’s book, “The Disappeared of Argentina” may be the penultimate poem in English on the subject, a powerful piece. Fortunately for the reader, this brooding on overwhelming political realities is balanced with lyric poems about life and the living. One of my favorites is about cats:

Our angels have grown wings

sprung invisibly from their kitten coats

blurs of fur, fangs and claws

that land daintily and unruffled

on the concrete patio.

(from “A Poem for Ricky and Emma”)

In spite of the author’s placement of older poems in the back of the book, some of these were the best and seemed more eagerly engaged with their subjects. Perhaps what was gained by aging–that all-too valued distance and perspective –is reflected in a cooler tone. There’s a freer emotional range in the poems written at an earlier time in the poet’s life. But, perhaps it is a characteristic of this poet’s work to play off a distant, more philosophical voice with a meatier, grittier, body-framed imagery. “The Turn” is so good it outdoes Coleman Barks’ translations of Rumi:

And when you suddenly turn

down a one-way street,

where before you couldn’t find yourself

rising up from darkness,

will be your heartbeat, a rhythm

slower than the movement of your feet.

If you move to this speed

you’d sell a world for

at a turn in the spiral path

of the darkness that is all light:

the clear red star of your heart.

Many poems reference the Cold War before the fall of the Berlin Wall and during Ronald Reagan’s presidency when America’s manipulation of anti-communist sentiment led to meddling in Latin American politics and class war. As many in the Bay Area did, Ross lived this era as an activist, going to and from the scenes, trying to help. In his “Salvadoran Cycle” and “Nicaraguan Cycle,” he captures some of this time:

At breakfast I sip coffee.

its bitter taste bites my throat.

Here a cup with sugar costs a quarter.

You can buy a beer for fifteen cents a bottle

and I hear a woman costs a few bucks.

While some of the tone is relentlessly despairing, there is also the anger of the activist:

(written during the Senator’s visit to Nicaragua)

The worms are beginning to crawl just under his eyes,

of the television screen.

You wonder how such soft creatures

are able to eat pure stone.

Finally, there is great compassion –for the downtrodden, the hard-worker, the homeless, the friend who has passed away. My favorite poem in the book comes out of Ross’s Christian background; it comprehends the biting truth of the Christ’s Passion in “How Jesus Earned His Name”:

The crucifixion was really the least of it:

worse still were the days they worked

the life out of him in the woodshop

where he joined sweat with blood

and tears to make a river that sang his name

and babbled his complaint to heaven.

It was there and not heaven

where he learned love for the slave

and hate for the master,

where his hammer forged

his passion for revolution.

It was there, too,

in the misery of toil

and subjugation to empire

that he sealed his fate,

and learned his first beatitude,

the one they never wrote down:

Blessed are those who work

for they will be crucified.

Translations from Silence is an important book by yet another of our relatively unsung Bay Area poets of passion and witness. 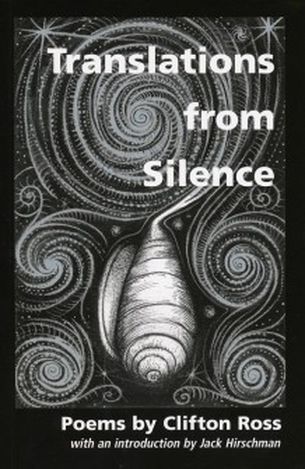