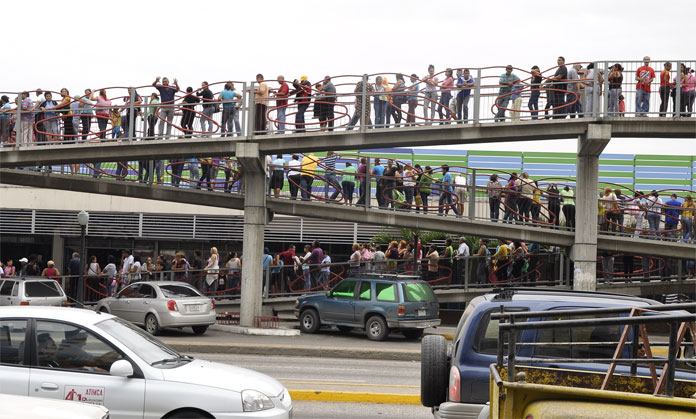 (Note: Dissident Island, a radio show based in London, just did a very nice editing job on an interview they did with me in October. It’s now online here. I hope you enjoy it. The following was posted at my PM Press blog).

2017 has been a rough year for Venezuela, one from which no one in the country will emerge unscathed. The year opened with a united opposition, represented by the MUD (Democratic Unity Roundtable), and what appeared to be the likelihood of a forthcoming transition to democracy into a government of reconstruction that would rebuild the economy after 18 years of mismanagement, corruption and disastrous policies implemented first by the late Hugo Chávez and then his hand-picked successor, Nicolás Maduro.

Certainly the scenario for the opposition wasn’t all roses, unless one considers the thorny aspect of that image. It had been defeated by the Maduro regime in its attempt to force a recall referendum (which was the peoples’ right, according to the Constitution), and had finished its first year as a neutralized power in the National Assembly where it had hunkered down and begun plotting a course to power. The Maduro regime earned its reputation as a totalitarian force throughout 2016 by using every power it weilded to keep the opposition legislature from carrying out a single one of its many tasks and projects and maintaining a strict control over every other government power. And finally, the opposition had also failed to force the legally mandated governor’s elections that were due to be held no later than the end of 2016.

Still, the fact that the opposition came into 2017 united was itself a victory of sorts. Just holding together that coalition of center-right (represented by Primero Justicia, for instance) all the way through the political spectrum to the far, far left (like Bandera Roja), and all perspectives in between, was an extraordinary victory. But the failures of the year before had their impact, and as the year opened the MUD seemed to be unmoored, and directionless, drifting on the sea popular discontent, or better put, the massive outrage, but with no clear way to channel or direct it.

Then in late March Nicolás Maduro overreached and tried to do an end-run around the legislature (again) in a deal with Roseneft to privatize parts of PDVSA, and it blew up in his face. The country exploded in protests that lasted for four months. On the surface, there seemed at last to be that “blaze of mutuality” between the outraged people on the streets and the political leadership of the opposition. It was not uncommon, for instance, to see political leaders from the MUD like Julio Borges, Miguel Pizzaro, Tamara Adrian and many others at the forefront of the demonstrations, holding forth at rallies, speaking to the press in defense of those killed, disappeared, arrested, tortured and mistreated in the dungeons of “El Heliocoide,” the infamous prison called by some, Venezuela’s “hell on earth.”

Four months of struggle and hope ensued. The moving testimony of participants indicated that this was no “middle-class” movement, but a broad cross-class struggle supported by the overwhelming majority of Venezuelans starved, deprived and repressed under the current regime. Polls showed Maduro’s popularity at 20% and lower during these months (where it had been for quite a while), and it only rose somewhat much later in the year when the even less popular Donald Trump took up the “cause of democracy” in Venezuela and threatened military action and Maduro’s popularity “shot up” five or so points. At the same time, nearly 90%, some 88% of registered voters, hoped to rid the country of Maduro and his supporters, and no doubt either supported, or sympathized with the demonstrators in the streets, battling the Bolivarian police and military day after day.

In the midst of it all, Maduro decided to rewrite the Constitution.

Yes, that very Constitution that held a sacred place in the Chavista mythos; the sacrosanct document that embodied people power and that now long forgotten but one-time central axiom of Chavismo, “participatory and protagonistic democracy.” The Bolivarian Constitution of 1999, which many believed to be Chávez’s lasting achievement, was now being set aside by his hand-picked successor as a ploy to undercut a massive popular movement to unseat him from what he considered to be his own personal throne.

The Opposition, despite stiff government resistance, managed to organize a non-binding referendum on Maduro’s proposal to impose a National Constituent Assembly (ANC) that would rewrite the Constitution. In mid July 2017 some 7.2 million voters participated with 98% rejection of the proposal. Despite this, Maduro pushed ahead and forced through the proposal for the ANC two weeks later.

The whole process of voting in the ANC was marred by fraud. Antonio Mugica, chief executive of Smartmatic, the voting machines used by the Venezuelan government, said “We know, without any doubt, that the turnout of the recent election for a national constituent assembly was manipulated.” The response of the Maduro government was to cancel its contract with Smartmatic and claim victory.

The bald-faced fraud marked, perhaps, the lowest bottom of this degenerating regime, and its shamelessness had the effect Maduro desired. Those who had spent four months being tear gassed and sprayed with everything from water cannons to lead bullets in the streets as they nobly fought to restore democracy in their country, suddenly turned away in disgust and went home.

Feeling energized by his victory, Maduro now decided to push for gubernatorial elections that he had illegally and unconstitutionally postponed. The Chavista-controlled CNE (National Electoral Council) which throughout all of 2016 had been “unable” [read, “opposed”] to put together a referendum on Maduro’s presidency, in a matter of weeks was able to organize the gubernatorial elections. Again, the elections were marred by irregularities, with the government moving polling stations around in opposition strongholds to throw off voters; paramilitary “colectivos” terrorizing voters, and etc. etc. Many in the opposition boycotted the elections and refused to run for office or refused to vote, and those few opposition candidates who won were unconstitutionally obliged to swear allegiance, not to the Legislative Council of the (Opposition-controlled) National Assembly, but to the new, Chavista-controlled ANC.

The Democratic Action broke ranks with the rest of the opposition, having won four governorships, and their candidates were able to take office by swearing allegiance to the ANC.

The Municipal Elections followed all these debacles two months later under an Opposition boycott that saw many more in the opposition break ranks and run in, or vote in, the process. By now the Democratic Unity Roundtable (MUD) was no longer unified in any sense. And it lost massively in poorly attended elections which brought Chavistas out in adequate numbers to sweep the country and take most of the cities. How Maduro was able to bring out the voters was analyzed in depth by the ever-insightful Michael Penfold. After years of starvation the Bolivarian government had gradually centralized food distribution with its Local Committees for Food Production and Distribution (CLAPs) and used this power as an electoral weapon against Venezuelans. As Penfold wrote of the plan of the government, “Days before the election, it positioned food subsidy renewal stations (“red spots”) next to polling stations. They were equipped with wireless internet connections that allowed voters to renew their Claps cards as they voted.” This process, he continued, “created the clear impression that the renewal of their cards was conditional on turning up to vote.” Gaby J. Miller also had a good first-hand report on the “red points” in an article aptly titled “The Perfect Blackmail.”

This election on December 10 was a devastating blow to the MUD from which it looks unlikely to recover.

Meanwhile, Maduro has continued to purge his party of critics, free-thinkers and anyone else revolted by the putrid decay at the center of Chavismo. Marea Socialista, which had been the “left wing” of “critical Chavismo” was now long-gone, even if it still refused to officially join the ranks of the opposition. During the demonstrations earlier this year, there was a revolt of the Attorney General, Luisa Ortega, who eventually had to flee the country, taking whatever records of Chavista criminality she could grab as evidence on her way out. In early December, long-time ally of Hugo Chávez and former head of PDVSA Rafael Ramírez was forced to resign as Venezuelan UN envoy due to critical remarks he offered of Maduro.

In short, Chavismo is now being purged of its “Chavism” as Maduro attempts to create “Madurismo” in preparation for his 2018 run for re-election. This is having the effect of fragmenting the Bolivarians. But however you cut the cake or split the pie or fragment the political forces of the country, the PSUV (United Socialist Party of Venezuela) is the clear winner. At least for now, on the political front.

The real issue, however, is not politics, but the economics. A study released earlier this year showed that seventy-five percent of Venezuelans had lost nearly twenty pounds of weight, and things have only gotten worse since. Hunger is clearly a policy of the Maduro government which it has found to be effective for controlling the population and making them more dependent than ever on conditioned government CLAP bags. There are no medicines; the health system is in tatters just as plagues like malaria, diphtheria, measles and others return to attack people weakened by hunger. Venezuela is one step away from becoming a more criminal Somalia, run by clans (“colectivos”) and gangsters (“prans”). While the oil industry implodes due to lack of maintenance and general irresponsibility and corruption, the country is entering a hyperinflationary spiral as the government continues to implement policies guaranteed to further erode the living standards of the vast majority. The military, to which Maduro has fed enormous chunks of the economy and the drug trade, maintains its support for the government, and everything is set to get much, much worse in 2018.

This is the grim scenario in Venezuela at the end of 2017. Unfortunately, from the looks of things, there will be no happy new year in Venezuela.