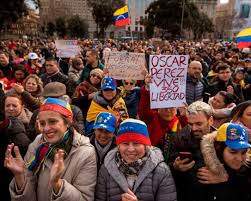 Caveats and Cautions on “The Bolivarian God that Failed”

Photo of demonstration in solidarity with Venezuelans in Spain.

I was deeply moved by the number of comments, tweets and emails I received in the wake of the publication of “The Bolivarian God that Failed.” My thanks goes out to Jamie Palmer there who did such a wonderful job of editing that this piece shines in ways none of my other work does.

The response has been overwhelmingly positive (even if I was forced to block someone who was trolling me on my Facebook page) but I think, perhaps because I may not have been entirely clear, or due to the nature of a format (an article, with word limits) some things were not made clear. So I just wanted to clarify, especially as a few friends have written me with great alarm about what I wrote, that I haven’t become a neoliberal right-wing extremist. I believe I’ve moved from the revolutionary ultra-left toward a social democratic or perhaps more accurately classic liberal center (for what it’s worth). That being said, here are a few clarifications:

Those are my immediate caveats and responses to comments that came my way. I’m happy to engage in dialogue whenever and with anyone who wants to talk about Venezuela in a respectful way. Which reminds me that I wanted to update the previous post where I wrote to the leftist who invited me to join a dialogue on a leftist website. They decided, in the end, that I was too far to the “right” of them for my views to have any sort of validity or to be worth publishing in their discussions.