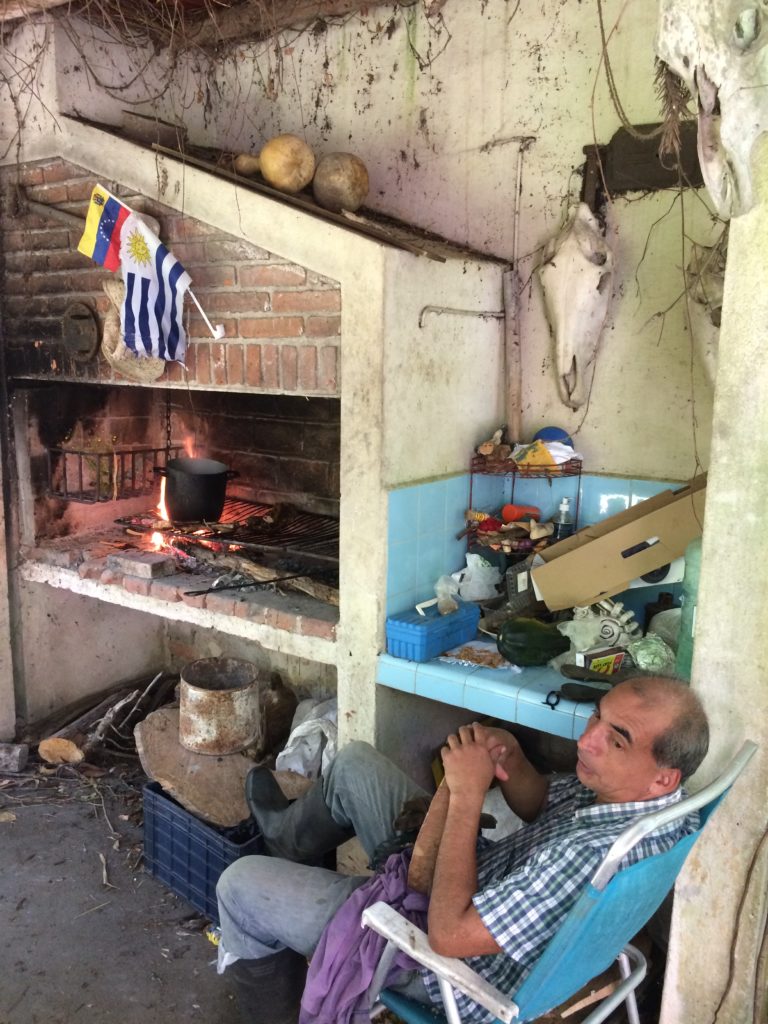 The “Electric Wars” and Left Wing Solidarity with Venezuela

“President” Nicolás Maduro has never been good at taking responsibility for anything at all but he, like his US homologue, Donald Trump, is very good at deflecting blame and lying to cover up his irresponsibility, incompetence and crimes. And so as the blackout dragged into its third day in Venezuela Maduro claimed on Twitter that “The electric war announced and directed by US imperialism against our people will be defeated.” I won’t repeat here what I wrote back in April 2016 under the title of “When will the Lights go out in Venezuela?” but the story needn’t be updated since the Maduro government has done nothing in the intervening years to remedy the situation that caused the present blackout.

Of course there is a doctrinaire, reactionary Left in the US that happily goes along with that narrative (that the problems in Venezuela are the result of sabotage, imperialist meddling, malicious oligarchs, “infiltrating moles” in the national electrical company, etc.) as demonstrated by the letter signed by a number of formidable intellectuals like Noam Chomsky, Greg Grandin and others, many of whom never cease criticizing Western liberal democracies but seem fine defending dictatorships in Cuba and Venezuela. Anyway, these “124 academics from around the globe” called out the venerable WOLA for supporting “various components of the Trump administration’s policy towards Venezuela,” and WOLA’s response was sterling. Read it.

I’ve had it with this sector of the left that can only see as far as its ideology and views the big world with glasses made for reading textbooks, not reality. That’s why a couple of weeks back I wrote an article while I was visiting my friend and collaborator  (In the Shadow of the Revolution), Arturo Albarrán, in Pan de Azucar, Uruguay. Arturo (in the picture) has now joined the millions of Venezuelans in exile and working hard to establish himself in his new home.

I sent the article (below) out to Dissident Voice, but the editors didn’t even bother to respond. So here it is:

The Golden Rule, The Left and Venezuela

A discussion urgently needs to open up in the US Left about Venezuela. Given that the US has become as politically polarized as Venezuela, and for much the same reasons, such a discussion, if we’re fortunate enough to find the humility to make it happen, is going to be painful, and difficult, but absolutely necessary if any segment of the Left is going to remain viable and healthy.

Allow me to state my conclusion up front: we need to agree on the target of our solidarity but that can’t happen until we open up a discussion about what’s really going on in the country.

As I’ve written elsewhere at length, the modern solidarity movement was formed in the early 20th century within the matrix of Marxist-Leninist ideology to support national liberation struggles. As such, the target of solidarity was the “vanguard of the people” in any given national context where a struggle against colonialism was taking place. It was a simple, Manichaean worldview where “the people” were viewed as a singular entity united by a Rousseauan “general will” aligned with its vanguard. Dissenters were viewed as “lackeys of the empire” etc. The work of the solidarity movement was to support, in any way possible, the aims and objectives of the vanguard party and this was the meaning of “solidarity with the people.”

With the collapse of the Soviet Union in 1991 this model should have come into question, but it didn’t because most of the national liberation movements had already come and gone, leaving behind governments of various sorts that were relatively independent. The degree to which the solidarity movement in general facilitated or aided that process of liberation is open to discussion, but certainly the solidarity movement in the US, mostly involving Central American struggles, gradually declined. But in any case there was very little discussion about the assumptions and philosophical or ideological foundations of the movement. When those discussions did take place, they usually manifested at a superficial level as personal differences which led to splits such as happened with the Nicaraguan solidarity movement after the 1990 elections that removed the Sandinistas from power.

With the coming of the “Pink Tide” in the first years of this century, attention, and solidarity, gradually turned to projects led by moderate leftists like Hugo Chávez in Venezuela, Evo Morales in Bolivia, and to a lesser degree to Rafael Correa in Ecuador, Daniel Ortega in Nicaragua and others. Once again, support for these leaders and their projects was deemed “solidarity with the people,” but the situation was entirely different from those projects of national liberation in the twentieth century. The new crop of leaders were mostly populist caudillos in the mold of the Argentine president Juan Peron,  or Juan Velasco Alvarado of Perú and others who led by the power of their personality rather than by the ideas that would guide a party or movement. Certainly they used the familiar terms from the projects of the twentieth century and even updated them—Chávez, for instance, adopted the term “socialism of the twenty-first century” to describe his populist project, as did Morales and Correa, but there was a distinct lack of substance to the language, a common trait of populism from the right (as we see now with Trump) as well as to the left. There’s no question that Chávez offered patronage to his constituency in the form of “missions,” and the other populist leaders did the same thing (often using Venezuelan oil money Chávez funneled to them), but there were no substantive proposals for enduring change in any of the projects that could qualify as “revolutionary,” except perhaps in Venezuela.

Even so, the revolutionary proposal in Venezuela was so poorly designed (if there was, indeed, a design) and so badly administered, that it resulted, in the end, in the disaster we see unfolding before us today. Certainly discussions need to take place to understand how the so-called “Bolivarian Revolution” failed and why, but they need to be fact-based, and not based on ideological assumptions and tired rhetoric. Certainly we’ll come to many different conclusions, based on the different facts at hand, but the debate needs to be open, without rancor, and without repressing any information or protecting anything but the truth.

Unfortunately, much of the Left in the US (and the world) has taken what can only be considered a reactive stance on the subject of Venezuela, one that goes roughly like this: “Whoever Trump is for, I’m against. Whoever Trump is against, I’m for.” Such simplistic thinking isn’t “thinking” at all, and it shouldn’t merit a pass from anyone hoping to move the world in a different direction. Indeed, such non-thinking just moves us further down the same road Trump has chosen for us.

We all have different information, but the facts remain the same. Let me offer a few that go largely unnoticed, overlook or conveniently shoved aside.

Juan Guaido is a member of one of the largest of Venezuela’s many social democratic parties (note, NOT “right wing”), Voluntad Popular (Popular Will). Guaidó and his party aim to restore the institutions and processes of democracy to Venezuela after 20 years of a populist project that has effectively destroyed separation of powers and institutional independence, and amassed all power under the executive. (Note of the writer: I wonder how leftists who support Maduro would feel if Trump were able to pull off the same coup d’etat. Or have they forgotten the “golden rule” which in this case would roughly translate to “support in other countries what you would want to see in your own”?) Guaidó hasn’t become the interim president by “declaring himself” such, but for the same reasons Nancy Pelosi would become president once Donald Trump and Mike Pence are impeached, should we be so lucky.

Juan Guaidó isn’t “Washington’s man in Venezuela;” in all recent events he and the rest of the opposition have followed constitutional procedure as outlined in the Bolivarian Constitution of 1999.  Guaidó’s ascension to the interim presidency was simply a matter of constitutional succession. And, given that the Maduro regime has repeatedly violated that same constitution to maintain himself in power (see below), the opposition under Guaidó has accepted international solidarity from anyone and everyone willing to help those struggling to restore democracy, including from the EU, nearly every other country of Latin America, and, yes, the United States, currently, and unfortunately, from my perspective, presided over by Donald Trump.

In the case of Maduro’s re-election, there were multiple problems with it. First, the May 2018 elections were called by a fraudulently elected body, the National Constitutional Assembly. That body was elected July 30, 2017 under dubious circumstances and with questionable legitimacy. According to the voting machine company, Smartmatic, the voting machines were hacked in an electronic version of the Mexican PRI’s “taco stuffing” of ballots. Accordingly, all actions taken by that illegal body are illegitimate and not to be recognized, including, and especially, the election of the president.

The last legitimate governmental body elected to office in a relatively free and fair election (if such a thing is even possible in Venezuela today when the National Electoral Council, the CNE, has been stacked by the Bolivarians) is the nation’s National Assembly. In the December 2015 elections with historically high turn-out, three quarters of Venezuela’s electorate turned out to vote in a 2/3 majority for the opposition. The Bolivarian response was immediate: the lame-duck Assembly illegally voted to stack the Supreme Tribunal of Justice (TSJ) which then began to peck away at the powers of the National Assembly. Again, the US left might consider the golden rule of politics here again, especially after Republicans in  Michigan and Wisconsin pulled similarly dubious moves to block incoming democrats after the 2018 elections. Since then the TSJ has committed various illegal acts that have been condemned internationally. The most grievous took place in March 2017 when it attempted to take over the powers of the National Assembly in a judicial coup, leading to months-long street protests all over the country.

The list of crimes goes on, but the reader can do his or her own research and investigation. These few facts should clarify why an honest discussion of the facts is necessary on the Left, and one that is based on the facts, and not on historical memory or false parallels with Salvador Allende and Chile–especially when the better correspondence of historical events in Venezuela today would be Peruvian President Fujimori’s “auto-golpe” in 1992. The Left needs to wake up from its unthinking, unconscious and reactive response to events in Venezuela so it can take a reasonable approach to the situation. No one in his or her right mind could support US military intervention in the country, but such an event is only real in Trump’s demented brain, and he has managed, unfortunately, to convince the Left that it’s an option. And to oppose humanitarian aid to the country as “the first step in an intervention” is not only ludicrous, but criminally stupid.

Anyone who knows anything about what’s happening in Venezuela today knows that the country is currently in need of just such a humanitarian intervention. But evidently a significant portion of the US Left knows nothing about what’s happening in Venezuela today, nor even cares. The reason for that is because its solidarity is directed toward a dysfunctional, incompetent, corrupt government run by a mafia under the language and utopian rhetoric that the left loves so much, and not toward the suffering people of Venezuela.