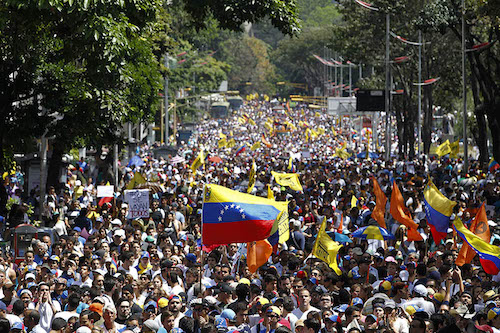 As I write, the “Taking of Caracas” is just hours away. The united opposition to the Bolivarian government has called on the people of Venezuela to gather in Caracas for what it hopes will be an ongoing protest. It’s a rather extreme measure, forced on the Venezuelan people due to the intransigence of the Bolivarian government which has taken pains to block the referendum, the only constitutional option for removing an elected official. It’s clear to everyone, including formerly loyal Chavistas, that president Nicolas Maduro and the PSUV (United Socialist Party of Venezuela) elite have used their power over the Supreme Court (TSJ), their domination of the National Electoral Council (CNE) and other branches of government to block the referendum. They have, in fact, repeatedly stated quite bluntly that the “referendum won’t happen.” They’ve attacked and broken up peaceful protests and marches organized to force the government to obey its own laws and allow the people their referendum. Now, when the unyielding Bolivarian elite seem to be dug into their luxury bunkers and unwilling to budge, the people will peacefully “Take Caracas.”

They’re converging on the nation’s capital from everywhere, and they represent nearly everyone, or at least that 88% of the nation that wants to see a transition in the government and an end to Bolivarian rule. They come from every sector of society, and so the Opposition that Chávistas had claimed was “mantuano” or “white and aristocratic” is increasingly a very representative cross-section of Venezuelan society. The barrios and “popular” or poor neighborhoods have also seen floods of people adding their numbers to the opposition. The march of the indigenous people from the state of Amazonas is the most poignant example of just how diverse the opposition movement has become in Venezuela.The indigenous march started out 2,000 strong on the very difficult march from Amazonas to Caracas. Along the way, the elderly and sick were forced to drop out so the number dwindled to 600, although El Nacional reported that 1,500 had arrived in Caracas in time for the “Toma.” They had been blocked by the National Guard, but managed to find a route around them and continue on to Caracas. In this long march they threw their support behind the referendum, protested the judicial decision to prevent their representatives from taking office in the National Assembly, and made a statement against the “political and ethnic discrimination” of the Bolivarian government. From Anzoategui Fr. Lenin Bastidas is leading a group of Christians to the capital. “If the world has to see a priest die to reestablish democracy, it will see it,” he told the press as he left the town of Soledad to march to the capital. Fr. Bastidas, too, was stopped and prevented from continuing on to Caracas, but eventually managed to continue his journey. He says he was never “political” but that what he described as a “humanitarian crisis” in the country has pushed him to extreme measures. He has vowed to undertake a vigil in Caracas, where he will “present the proposals I bring to President Nicolás Maduro and his government.” He went on to say that “if they don’t accept [the proposals], I’m going to sew my lips together and chain myself under the sun until I die so that the whole world will see that if a priest is capable of doing this for a people, it’s because there really is a humanitarian crisis in this country.” One could go on to tell hundreds of thousands of other stories, detailing the dramas that lead up to the September 1st “Toma de Caracas.” The drama has an even greater charge given the nature of the disaster experienced by ordinary Venezuelans who are moving from hunger to starvation even as Maduro and his cronies continue to dominate the media with their plump, self-satisfied smiles that proclaim the great advances of their Revolution which has destroyed the country.

But as Venezuelan writer Alberto Barrera Tyszka indicates, these smiles, alternating with menacing sneers and threats directed at the Opposition, are hiding “panic attacks:”

“Chavism no longer knows how to bring together the people. The government, on other occasions, bet on wearing away its opponents. Without the least scruple. It decided to use the poverty of Venezuelans, their needs and scarcities, so as not to negotiate anything. It preferred to sacrifice people over relinquishing its absolute control of power. But now the reality has changed. The economic crisis is suddenly dizzying. The policy of paralysis no longer seems so effective. The incendiary and adamant discourse has fewer followers. The church that promoted the cult to Saint Hugo is no longer in style… Long ago the revolution changed the promises into threats. Now the socialism of the twenty-first century is only an excess of military generals.”

Tyszka writes that in this state of panic, Maduro seems to have lost his sense of proportion, indeed, his sense of “reality.” He continues, the government’s “reactions about the proposed September 1 march are intemperate, erratic and miserable. Their imagination increasingly resorts to violence. Before the Venezuelan people, and also before the international community, the government of Maduro seems only to conjugate three verbs: prohibit, censor and repress.”

This explains the “irrational” and desperate measures the Chavistas have taken to try to block the referendum and popular protest: preventing the marches, attacking the opposition newspapers, arresting the leaders of opposition parties and taking as many other measures they can to try to stop the tsunami of protest arriving in Caracas in just a few hours. They may be panicked and afraid, but they aren’t stupid. They know the power of that wave that is arriving, and it won’t be the last one they face before they’re finally washed away.

Update: Despite the government closing down five metro stations in the opposition regions of Caracas, pro-government paramilitaries (colectivos) blocking and even burning busses; National Guard hindering marches and dispersing groups of people with tear gas, all to prevent demonstrators arriving at meeting points, the opposition governor of Miranda, Henrique Capriles, called the Toma de Caracas the “largest mobilization in the history of Venezuela.” Whatever the truth of that might be, the Toma was anything but a failure. Maduro’s response was more of the irrational expressions of the “panic attacks” about which Tyszka wrote: he claimed that a camp of paramilitaries had been uncovered just 500 meters from the Presidential palace (Miraflores), and he also claimed that opposition leader and head of the National Assembly, Ramos Allup, knew about, or was part of the group. As usual, he produced no evidence and expected to be taken at his word. The clash will continue between the executive and the powers it controls (military, judicial, electoral, “popular”) and the opposition, under siege at the National Assembly, but with the support of a large majority of the country. Maduro, in the wake of the “discovery” of a “paramilitary camp” says he is going to strip the parliament of its immunity. Clearly, he thinks he can continue his destructive reign by more repression and more arrests of opposition leaders (like the two opposition mayors detained in Aragua the night before the Toma).

But the pressure is on Maduro from every side, and it’s showing increasingly in the enormous wave of protest that is building and growing every day.

Maduro is Weaker than He Appears