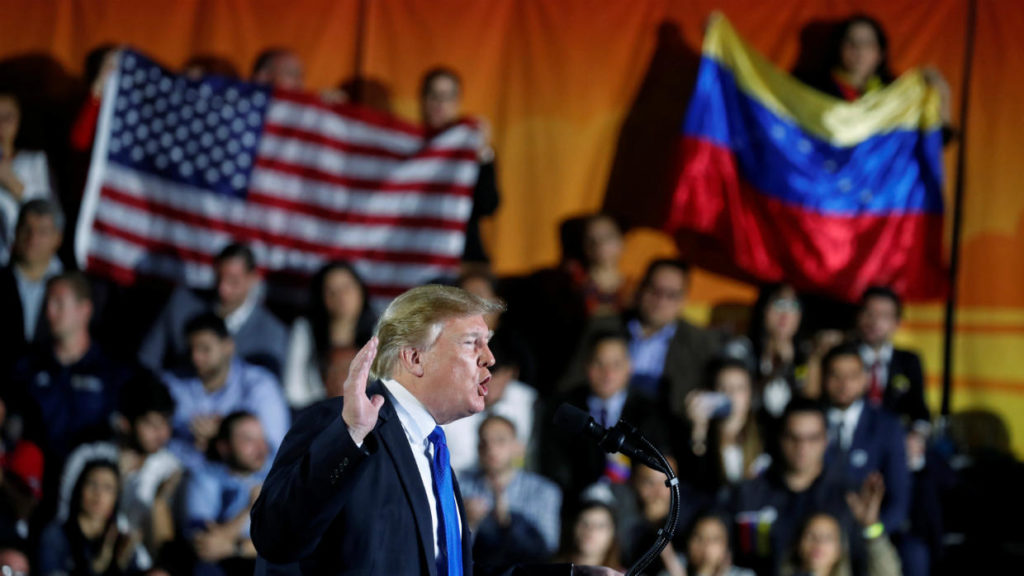 (This is a revised version of a piece first published at Caracas Chronicles. I think that piece lacked nuance, so I’ve worked it over here)

Imagine my surprise to hear that my Venezuelan friend’s parents “like” Trump. I suppose that “distance makes the heart grow fonder” since for many years it had the same effect on me vis a vis Chávez. But while we’re at trite, but true, aphorisms, let’s try “familiarity breeds contempt.” It’s another way of saying the same thing: that utopias, heroes and mountains always seem so much more beautiful at a distance.

It took me years, nearly a decade, in fact, to recognize in Chávez all the disgusting traits I’ve always seen in Trump: the intellectual laziness, the arrogance, self-righteousness, narcissism; the clownish entertainer’s need for attention; the admiration for dictators and autocrats which always indicates a hunger for power; the tolerance for corruption, which always evinces moral laxity and personal corruption.  Indeed, it’s almost as if Chávez was the prototype for Trump, as if he were the mold for the person of Donald Trump, his inverted image, the left-wing version of the man occupying the US White House today.

Notice how Chavez/Maduro/Trump govern by family rule, moving into power like one great mafia, bringing their families into the closest rings of power, followed by all their cronies; how they demand total loyalty and submission, bribing their loyalists by indulging their corrupt practices of self-enrichment, and punishing anyone who dares to defy their pretensions to absolute rule; how justice is perverted and reduced to an instrument for the punishment of personal enemies; how politics is reduced to backroom transactions to extend the control of the Leader; how the Leader is above reproach, no matter what outrage he might commit.

There is a name for this way of doing politics, of course: Populism. And increasingly, it is becoming the only political game around as liberalism dies its slow, agonizing death. Populism, unfortunately, has become normalized around the world such that very few can any longer recall a time when governments were run in the interest of the whole society and not just the followers of the Leader; when whoever was currently in power saw his or her term as temporary and subject to the will of the people; when political parties had platforms, principles, and ideas and were not simply organizations to uncritically shore up the rule of a single individual; when there was rule of law rather than rule of the Leader; when plurality of opinion was valued and disagreement wasn’t simply viewed as disloyalty but rather as a positive contribution to public discussion.

Not that liberalism worked as well as it was conceived in the ideal, but that there was an ideal to reach for. But ideals and principles and values have been replaced by personalities, and now everywhere liberalism is crumpling like a paper unicorn before the brutal, ignorant and shallow, but powerful, force of populism. In that sense, Venezuela has been the canary in the coal mine where liberalism died first.

The temptation, of course, is to be drawn into the populist project, but there are two ways to do that, both equally dangerous. The first is to bow to the Leader and join his project and reach out to grab the goodies when he breaks open the piñata of the national treasury to shore up his personal project. This is what so many good leftists, community activists and organizers, and yes, also political and other opportunists, did when Chávez began giving away oil revenues in the country to ensure and extend his power. Similarly, it was the working-class white people in the American heartland, and in the rust belt, and deindustrialized urban areas and massive swathes of territory in the US left behind by liberal globalization that came out to support Trump against the liberal establishment.

But there’s another way to empower populism, and that is by opposing it with populism. This is what Chantal Mouffe and Ernesto Laclau and others advocate. The problem, they argue, is not with populism per se, but rather what sort of populism it is, that is, whether it’s “left” or “right” populism. What is needed, they say, is a populism of the left to build a “hegemonic” project. This is the thinking of many of the Bernie Sanders folks who believe that Trump’s populism can only be defeated by populism of the left.

Nevertheless, in a polarized society created by populism (and that polarization is a key feature of a society under populism) it’s just as much a characteristic of the left as it is of the right to pit populism against populism. That’s why lower and working-class Trump supporters rallied around a billionaire caudillo to oppose “liberal elites” and “left-wingers.” And that, evidently, is why my friend’s (Venezuelan) parents are looking to Donald Trump with such hope. They and other Venezuelans see in him an ally in the struggle to get rid of one of the most corrupt and repressive dictatorships in their country’s history.

But while Trump may be seen as an ally, Venezuelans should keep clear in their minds precisely with whom they are dealing. The tendency to drop a friend or an ally—or make enemies of them—over a simple disagreement, such as Chávez did with Baduel, or Trump did with Michael Cohen and others, reveals not only a petty mind, but probably also a narcissistic personality type. And normal narcissism can be distinguished from the dangerously malignant types when they not only break with friends and allies, but seek their destruction.

Nevertheless, it’s true that in a time of war we can’t choose our allies and we’re forced by necessity to build alliances with forces who in another moment might wish to destroy us—one thinks of the alliance Churchill and Roosevelt made with Stalin to fight Hitler, or even the “pact” Stalin made with Hitler. In some cases the alliance had not even ended before the parties were engaged in plans to destroy each other, and certainly none of those politicians ever confused a strategic alliance with friendship. And neither should Venezuelans.

So if you’re feeling friendly inclinations toward Donald Trump and believe he wants to help Venezuelans, it might be worth asking a few questions. For instance, why has he been so slow to do even the smallest things to help those Venezuelans driven into exile by the policies of the Maduro government? Indeed, other than for reasons of his well-known racism, why hasn’t he invited those exiles into the US?  Why has he gone so far as to exclude his Venezuelan “friends” from the US by putting them on the list of countries whose citizens are banned from travel in the US? Could it be that Trump’s loyalty to his friends is no stronger than the loyalty he shows his spouses? And while you’re asking questions, ask yourself how he’s treated his other friends, like all the traditional allies of his country, insulting them and treating them with shocking disrespect. And then, finally, there’s the “solidarity” he’s shown the Syrians, in particular, the Syrian Kurds. They know something about Trump’s “solidarity” and “moral support,” though “moral” in the same sentence with Trump is oxymoronic. In the two months since Trump abandoned Syrians to their fate with the Turks, the Russians and Assad, nine million more have been displaced and half a million more are now refugees. Consider the effects of Trump’s friendship where his policies have turned that country from a “humanitarian disaster” into a “horror story,” according to the UN.

One can only wonder what sort of horror Trump has prepared for Venezuela.

This piece from Reuters on the criminals in Venezuela’s Special Action Forces of the National Police.

New York Times quotes John Bolton as saying, accurately in my opinion, that “we were insufficiently strong in our support for Juan Guaidó, and theatrics are not equivalent to support.” As usual, Trump is about nothing if not about theatrics. He’s a second-rate showman inferior even to Ronald Reagan, and an even worse president.

And here’s the real winner, from Jorge Arreaza, former vice-President of Venezuela, now Minister of Foreign Relations who rose in the ranks of the ruling PSUV for having been married to Chávez’s daughter. According to his tweet today, US sanctions against Rosneft for helping Venezuela export its crude oil “violate the right to free trade and free enterprise” (“violan el derecho al libre comercio y a la libre empresa”)

By the way, I don’t think the sanctions against trade are helping anyone at all. Like just about all of Trump’s policies, they’re ill-conceived, ineffective and all for show. He is, after all, only a showman, and a failed businessman and now a failed, and impeached, politician of the lowest rank.